This property has been viewed 278 times.

The villa is conveniently split into two levels and it is ideal for two families looking for a place to be together around the pool area and barbecue and at the same time enjoy their privacy as a family. The upper floor has a lounge, a dinner, a kitchen and double bedroom with en-suite bathroom. The ground floor has a lounge, a kitchen, a dinner and two bedrooms, a bathroom and a WC.
6+2 | 3

Select your dates using the calendar

Villa Lianolia is a Corfu villa with a large private pool at walking distance to Saint Spyridon Beach. The villa is about 42 minutes from Corfu Kapodistrias Airport (CFU) and it is located in a quiet neighbourhood, not far from local amenities, restaurants, supermarkets and a sandy beach.

This property is ideal for a group of friends or a family up to 8 people. It can sleep six (6) people in three (3) bedrooms and another two (2) in two (2) lounge sofa-beds.

The villa has air-conditioning in all the bedrooms and the lounge. It features two specious lounges, two dinning areas and two fully equipped kitchens.

The private pool and surrounding area are something special. The pool measures from 6 to 12 metres, making it one of the biggest outdoor pools in the area.

The nearby sandy beach of Saint Spyridon is ideal for families. It is split into two smaller beaches, both very well organised, with sun-umbrellas, sun-loungers, pedalos and canoes. A supermarket, two tavernas, one of the best restaurants in the area (Pyramid), a mini gold, a snack bar, a night bar, a public pool with child's games. All in all, Saint Spyridon is a fully functional summer resort in this beautiful part of Corfu. 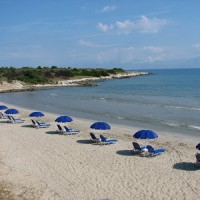 Agios Spiridon is only a small coastal neighbourhood, extension of Perithia village and consists of two beautiful bays overlooking the high Albanian mountain.
The place is North Corfu’s Natural Reserve and is recommended for those ones who are looking for a quite relaxing holiday, with nearby walks and excellent for birdwatchers and botanists.
Both the bays are very popular due to the fine sand beaches and get really crowded on the weekends.

This villa is situated in a beautiful serene location with pool and bar area. Will definitely come back to Villa Lianolia!

We had a wonderful holiday in villa Lianolia. The villa and pool were spotlessly clean,with everything you would need, the area was very quiet and very relaxing and Virginia and Vasilis were the perfect hosts. Nothing was too much trouble and they were on hand if we needed anything. My son specifically loved the separate apartment above as he had his own space to do as he wanted. There was a lovely beach about 5 minutes walk away and some lovely coastal areas to visit with superb restaurants to eat. All in all a perfect holiday and we were all relaxed when we came home.

Villa Lianolia - a really lovely villa in a very quiet part of NorthCorfu.

Villa Lianolia - a really lovely villa in a very quiet part of NorthCorfu. Great couple of beaches nearby and motor boats for hire from local beach (North Corfu Boat hire)- thoroughly recommend splashing out for an amazing day out, total novices have a 30 min lesson (excellent and very simple) before setting out. Pool is awesome, huge and spotless! Feels like a hotel pool all to yourself. Tavernas a ten min walk down the road or a bit of nightlife- Kassioppi is a 15min drive away. All in all a fantastic villa for a family of 4 or 6 or just about 8 at a squeeze. Lovley owners are in property next door, speak excellent English and always on hand to help out or give advice. A great spot for a peaceful break.

My family and I had such a wonderful stay

My family and I had such a wonderful stay at Vasilis’ and Virginia’s villa, who were so welcoming and on hand to help or give us any local guidance from the moment we arrived. The villa is in a perfect spot on the NE past of the island - walking distance to a couple of markets, cafe, restaurants and a local beach. Not crowded either. Four of us (adults) occupied the villa and there was more than enough space for everyone. The hot weather was eased by the swimming pool, which was tended to twice during our stay. It’s been a while since I had been back in Corfu and I had forgotten large parts of the island. I was so happy to rediscover the beach coves and small towns including San Stefanos (watch out for sea urchins), Kalami (The White House) and Kassiopi (check out the restaurant/bar on the main road with Mike The Fisherman as the chef). You never go far without feasting on delicious fresh food and meeting such friendly locals. Plan for a good hour to drive to and from the airport, but the scenery through the northern part of the island more than makes up for it. A big thank you to Sofronios, Stefanos and the rest of the EOS Team who helped make our stay so enjoyable and left us wanting to return again very soon. Highly recommend.

Beautifully spacious villa close to the pretty Saint Spyridon beach, which also had some water sports. We even hired a boat for the day from here! The villa has a self-contained apartment above with lovely views. We had everything we needed, even books and games to play! The pool was the biggest weve ever had, with an outdoor shower, especially great after the beach when we returned for more pool games and fun! The owners were close by whenever we needed anything, and arrived immediately on our arrival with a friendly warm welcome, and a farewell at the end. I definitely recommend this villa!